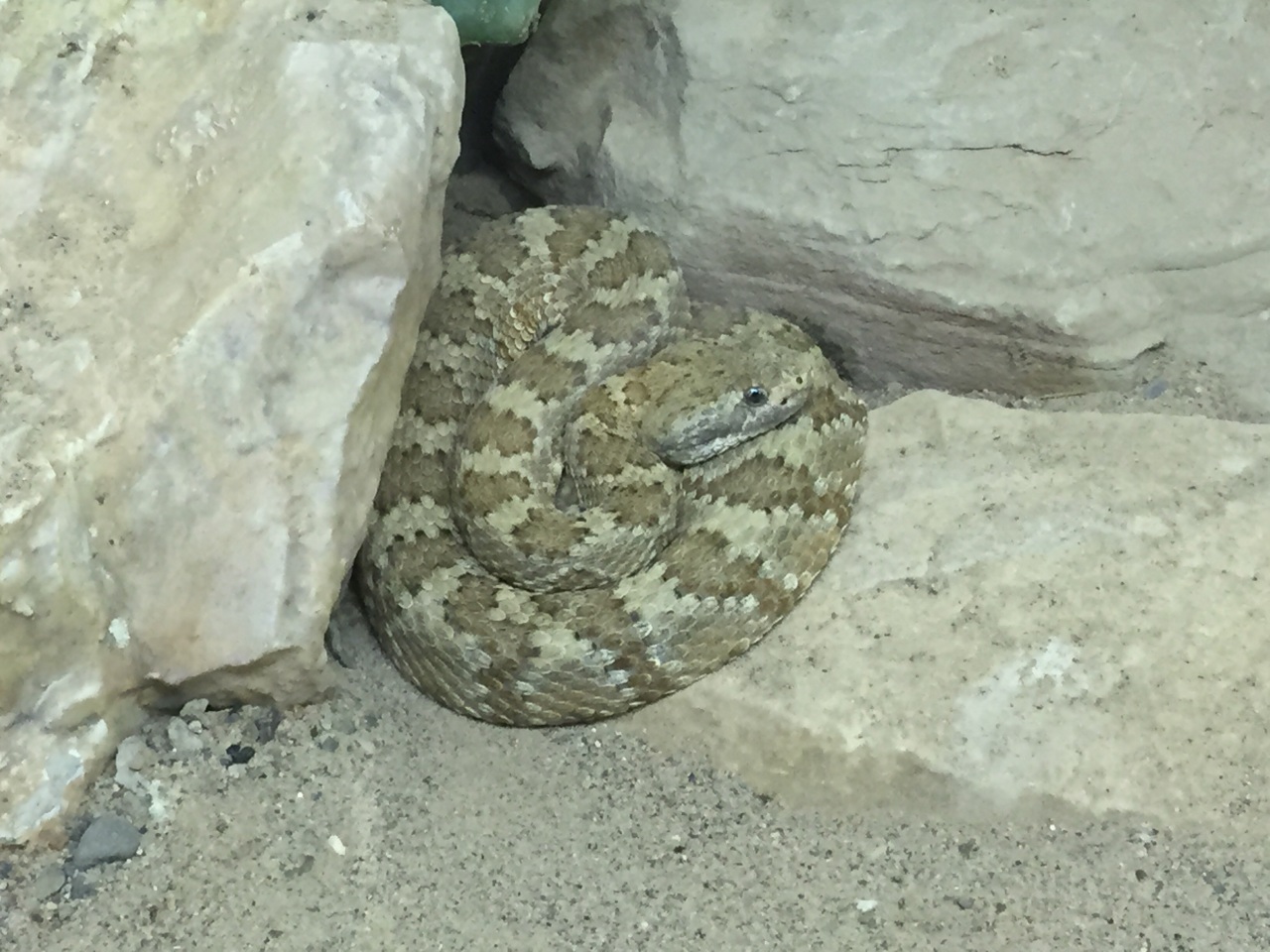 On a recent road trip in which I intended to visit wildlife related attractions along the way; one of the places I visited was Albuquerque, New Mexico. I stopped in Albuquerque with the intent to visit just one place; the Rattlesnake Museum. Located within the Old Town Albuquerque, the historic district is as with many historic districts, a popular, culturally rich place for tourists to visit galleries and shops. But I was not interested in shopping. Instead I was curious to learn more about what the Rattlesnake Museum had to offer.

My friend with which I was traveling and I arrived a bit early. Throughout the district, many of the shop owners were setting up for the day and so all we could do was walk around for a bit. We made our way to the Rattlesnake Museum which was also still closed and so we took a seat right outside and waited. The sign on the door stated that the museum may be closed due to animal rescues and other related things. As we waited, I couldn’t help but wonder what it was going to be like inside and conjured up a few not-so-cool scenarios. I kept seeing in my mind little rattlesnake trinkets like the “rattlesnake eggs” that are used often to impress kids. But I couldn’t imagine the “museum” would have an actual exhibition or live snakes for that matter. I was doubtful.

Just a few minutes past the declared opening hours, a white 1990-somthing Jeep Cherokee drives up and parks right outside. By the looks of the wildlife bumperstickers it seemed to be the curator for the museum. Out comes a smiley and seemingly enthusiastic guy who rushes to open the door, and tells us he needs to turn on a few lights and then he will be open. So we continued to wait outside talking to him as carried a container to his jeep. He stopped to let us see what it was. It was a Red Sided Garter snake whom he rescued from someone’s yard. The snake who had apparently eaten something, perhaps a rat? or being semi-aquatic maybe a toad? He said he would be releasing the snake as soon as it passed whatever it had eaten. Which is important since releasing the snake while there is still something digesting in its stomach would make it quite vulnerable to other predators. Already I was impressed with the care and effort taken to ensure the safety of this individual snake. 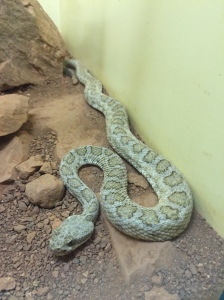 When he announced to us that he was all set for us to enter, we walked into what looked like an ordinary souvenir shop, with a rattlesnake theme of course. T-shirts, hats, key chains, magnets, stuffed animals and knick-knacks filled the space. I noticed it opened up to a second room in the back and figured that must be where the attraction lies. After chatting a bit we purchased a couple of exhibition passes and Bob led us to the back room. Surprised at the first sight of live snakes carefully displayed in terrariums I was excited to see more. But surely this is the only room, right? A handful of terrariums and that’s it right? Nope. The first smaller display room opened up into a second larger room also filled with living snakes, different species than in the previous room.  Each terrarium had a corresponding plaque with descriptions of the individual species. I was impressed. And that was not all.

The second display room opened up to a third room also filled with carefully placed terrariums of not only native snake species but of tropical and sub-tropical ones as well. I enjoyed stopping at each terrarium to see what was inside. Many of the snakes were familiar to me and I took pleasure in being able to recognize them. Then there were the exotic species I had not yet heard of or seen, which was particularly intriguing. After combing through the last room I was sad to see it come to an end though at the same time was thoroughly pleased by the experience. It truly exceeded my expectations.

Being able to talk with the museum’s director, who’s name is Bob Mayers, made the experience even more worthwhile. His enthusiasm, knowledge and dedication was paramount. I enjoyed talking with him. We talked again about the Red Sided Garter he was going to release. Apparently, a local resident found the garter in their yard and called Bob to remove it. After getting a description of the snake over the phone, Bob ensured the fearful caller that the snake was harmless and that leaving it in their yard would actually be beneficial. But as with many people’s regards to snakes, any snake is seen as menacingly dangerous and must be removed or “dealt” with. They wanted it removed. So to ensure the snake is kept safe and is not killed Bob retrieved it for relocation.

Bob and I went on to talk about how we have come to appreciate snakes and all wildlife. I told him about how my mother has always been kind to animals and would never kill any animal. I told him about the time when I was around 8 or 9 years old, a garter snake would occasionally visit my mother’s garden and how instead of removing it or killing it, she loved to share it with us kids and pointed it out to us enthusiastically and with respect. She even named the little garter Nikki. We loved seeing Nikki in the garden from time to time. It was something we looked forward to while playing outdoors. Then one day Nikki had babies! Suddenly we found lots of baby garters in the garden. It was one of the many wildlife experiences I will never forget. I continued to tell Bob that even now, my mother will find various snakes wandering into her yard and still, with respect, she will either simply let them be or she will relocated them further into the woods behind her house. I felt a great pride in being able to tell these stories of my Mom. In fact I am very proud of my Mother for this.

Bob returned them favor by telling me a story about his Father, who when he would find snakes on the road, would stop and take them away from the road so they would not get run over.  It was all smiles and good feelings. Proud stories to share for wildlife enthusiasts. Very proud indeed.

The exhibition in the end was very impressive and worthwhile. It is much more than just a Rattlesnake Museum. Bob’s efforts also educate the public on issues like wrongfully owning or removing wild and exotic animals from their natural environments. And how by doing so the species and ecosystems suffer. Many animals at the museum once belonged to people who thought they could keep them as pets and soon learned they were not capable of meeting the animal’s needs. Very educational indeed. I am glad to have met such an  individual working towards educating the public on such matters.

The Albuquerque Rattlesnake Museum is a definite must see for any snake/wildlife enthusiast passing through Albuquerque, New Mexico. As for those who dislike snakes, I also encourage you visit the Rattlesnake Museum and talk with Bob. Perhaps it will spark an interest you never knew you had or perhaps you will gain a new appreciation and understanding of rattlesnakes and their role in nature.

I want to thank Bob for his enthusiasm, knowledge and dedication; and for educating the public about the “less desirable” creatures of nature.

Learn more about this museum and rattlesnakes here.