Just yesterday, my partner had returned home from a quick errand, upon exiting the car he saw a gopher snake at his feet. The car was parked near the tree in which a pair of white-wing doves had made their nest. The snake slithered in to a bush situated just beside the nested tree. After some curious admiring we left the snake, figuring he’d want to be on his way once we gave him some space. It’s always fun seeing what kind of wildlife will wander onto your own yard!

Late this morning, again my partner spotted the gopher-snake while retrieving something from the car’s trunk! This time the snake was eating what appeared to be the white-wing dove fledgling. Soon enough, our guess was confirmed once we spotted the parent doves watching helplessly with unease nearby. We could sense their despair in their confusing behavior and various coo’s. They were indeed distraught.

The challenges birds’ face during nesting/fledgling season are numerous. In my front yard, this gopher-snake awaited the perfect opportunity to take this white-wing dove fledgling from a nest I have been watching for weeks now. We noticed these nesting dove’s sometime after the arrival of the nesting killdeer, which I wrote about in a previous post.

We watched and speculated various scenarios. Did the fledgling try to fly and fall to the ground? Did the snake slither up to the nest to grab the fledgling? Could the snake have climbed the tree at all? Is this the same gopher-snake from yesterday? If so, could he smell the fledgling above in the tree? Was this his plan all along, to sit and wait in the bush for the perfect opportunity? We can so many questions. Gophersnakes do in fact climb trees and have been known to climb their way into bird houses or squirrels nests. We don’t know what actually took place but it was, nevertheless, interesting to see all of this play out from our from patio.

After a half an hour or so, the gopher snake managed to take down the bird to the last feather. With a great bulge mid-center of it’s body, the snake remained for a few moments, then disappeared into his bush to digest. We awed at the experience and watched as he periscoped from within his bush hideout. After a few minutes, the snake slowly moved across the graveled drive way. Sluggish from his meal he taking several short rests as he slithered awkwardly toward the grassland nearby. I wanted to keep an eye on him because in order to reach the grass he had to cross a dirt road and I didn’t want someone to hit him. When he was about halfway through the gravel driveway, the nesting killdeer parents were in panic mode, straying away from their eggs in an effort to deter the uninterested snake. We realized the killdeer too, had been aware of the snake’s presence that morning.

Finally, the snake disappeared into the grassland and he killdeer returned to their post as dutiful parents-to-be. Meanwhile, the white-wing dove parents, still distraught, called out distressing coo’s nearby, flying in and out of the nest’s site seemly perplexed and dismayed. It’s been an interesting morning, all this amazing activity before even noon…

Down to the last feather. 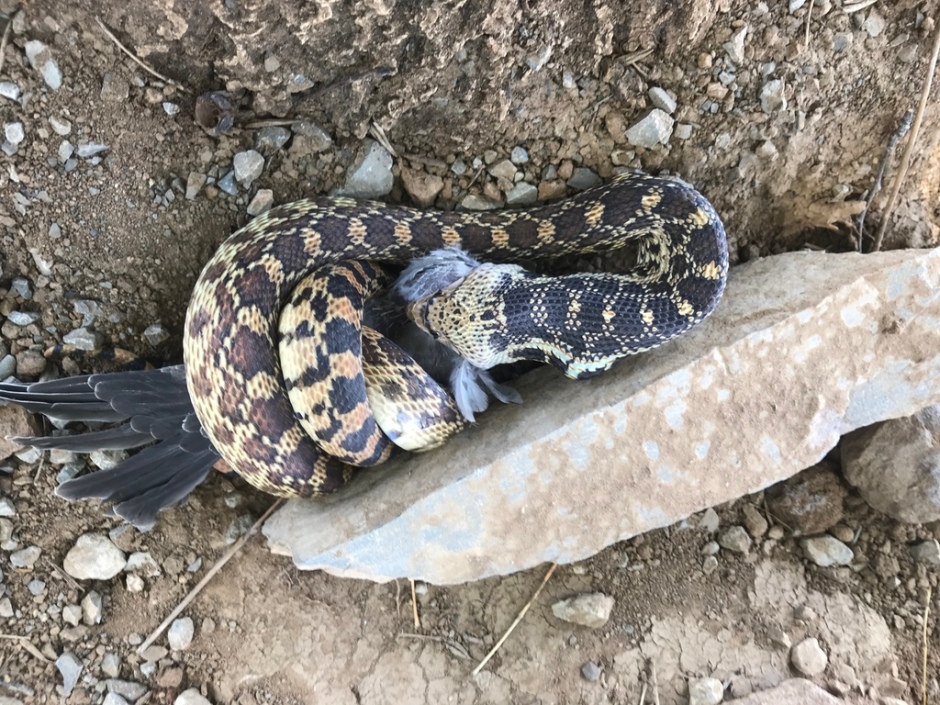 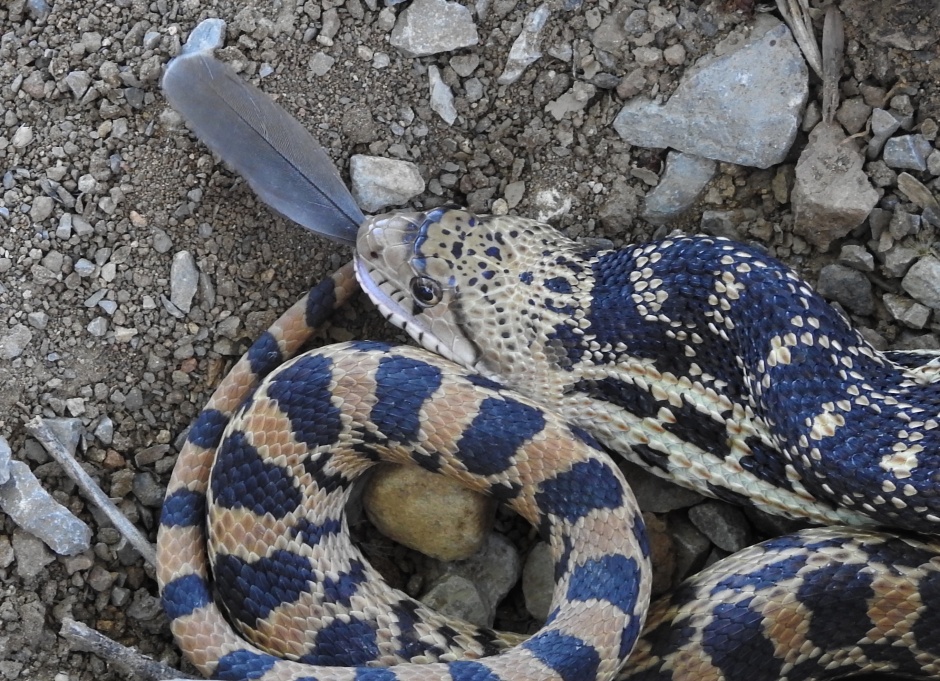 Opportunities In Nature from WildFeather on Vimeo.