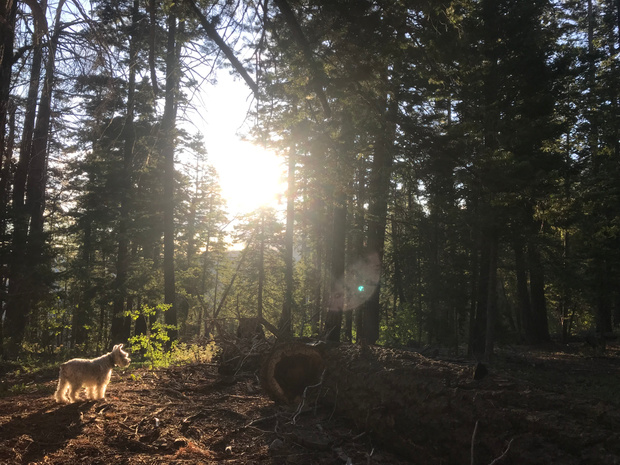 Needing desperately to get away from the monotony of recent days, I ventured into the forest near, yet far enough away to find reprieve from the trappings of light, noise and neighborly unrest, into the forest I feel is mytrue home.

Discovering new and wondrous natural things around different bends of trails, ridges and springs, I swear every time, I will learn this wild place from within its deepest depths. I know much of it already. It’s seemingly never-ending hidden treasures, so expansive, I know not even a lifetime of exploring would do. Though I’d be willing to spend the course of my life to try to do so. For my sanity and for my heart and my soul.

The first night out, camped nestled within the cool verdin embrace of deep forest trees, where just beyond, a giant chasm, a valley, hosts even more wild things below. The valley which can only barely be seen through layers of nature. Layers of old burned trees, younger ones willing to grow old, or burn trying and young sprawling aspens.

The night was so wickedly peaceful, nature’s silence fell as if to heighten the awareness and reveal hidden consciousness. Feeling so deeply taken by the soulful, natural silence, I peered with my ears into its literal deafening beauty inspiring and inspiriting deep rest.

At my so called “home”, away from this place, my true home, there is no rest of such kind. No true moments of silence from far off engines, nor from over-head and over-heard, aircraft and other irate and unnecessary commotions. But here, there is rest.

As I fell into a light slumber the awareness of such intense silence was almost too much to ignore. It had been a long while since I had experienced such freedom from noise. In most so-called wild places I have visited, sounds of far off planes can still be heard.

In moments of wakefulness through the night, I had to experience this intensity of noise-less-ness. Periodically I awoke to a starry lit sky lending my ears out to it, utterly amazed… The intensity of both a brilliant starry night sky and silence was so prominent I didn’t want to miss it. Which ironically prevented me from getting the deep sleep I thought I’d get that night. I wanted so much to be as present for it as I could be. For it {true silence} is such a rarity, an endangered species. Alas, the sleep I needed, pulled me away from the [now] rare phenomenon.

Normally I am a light sleeper, though happily rest easily with the sounds of nighttime critters. Yipping coyotes are a favorite. And creatures which so many find annoying, like crickets, cicadas and croaking frogs, easily lull me to sleep.

The sound of natural silence is a phenomenon in which I am deeply interested. I often dream of meeting such places left here on Earth where the wonder can still be experienced.

The idea of those spaces becoming more and more endangered sets me on a dream of a quest. A quest for natural silence.

In the morning, I couldn’t understand why we had experienced such silence. Not even an airplane I could recall hearing. I was both honored and bewildered by the experience. I wanted to know what tonight’s camp would hold for us, where ever we were to end up in these vast mountains.