The morning was crisp and chilling. After reaching the Big Tree trailhead, I had contemplated whether to keep my extra layer or leave it behind and bear the coolness. Despite freezing nighttime temperatures, I knew the day would eventually, and sufficiently, warm enough to leave it behind. Many hiking experiences before have taught me that the extra layer could quickly become an annoyance, since hiking itself builds internal warmth. And far too often, I’ve ignored my own reasoning and experience, paying the price of discomfort. I kept it and onward we went.

The trail’s topography is typical, yet lovely, “S”-ing through a diverse landscape of native flora. The understory, equally lovely and diverse. Though still very desert-like, my eyes wander to meet these often ignored natural intricacies. The big tree of which we seek to greet again, lives within lower Madrean montane woodlands, just outside the Chihuahuan desert. Gratefully aware of the day’s calmness, the peacefulness brings my attention to the sound of water. “Sounds like a small waterfall.” I say aloud, curiously. Seeking the source of the sound, we find a small ravine lined with diverse rock outcroppings. The trail crosses the small creek which today is flowing. Not far from this crossing is a small, but unique, waterfall feature. Hiking down to meet it’s base, we find whimsical shrubbery crystalized in ice where the splashes of the waterfall meet the ground. Seeing the iced vegetation and feeling the nipping coolness down there reminds me it is still winter. And for the moment I am glad I kept my jacket.

The trail continues across the landscape encircled by distant mountain views. Forested ridge-lines form the Gila’s wilderness to the north, which appear ever so enticing. These views seen most incredibly when the trail passes through an open meadow grassland. The wooded edges of this meadow come to life with Woodhouse-Scrub Jays who bounce about the pinyons and junipers. To catch glimpse of their brilliant blue bodies is always captivating.

The trail to the Big Tree meets three trail junctions signs along its path. The last sign points towards the Big Tree, only a tenth of a mile away. Just as the last time I was here, I peered across the canopies to see if I could spot it. Not yet. There is an anticipation that occurs when one is to meet with such an ancient giant. It’s always a wondrous experience, first time or last. Then soon, the Big Tree comes into view. It’s massive trunk and towering canopy is impossible to miss. Standing back about 100 feet is the only way to capture the tree in its entirety by camera.

Laying down at the base of the tree I look up its enormous trunk. I tried my best to capture it’s grandiosity from its base. Though it’s wide canopy escapes the lens of my camera. With the canopy spanning over me I can see signs of wear and tear. It appears a few large branches or missing from some time passed. Its ancientness leads me to wonder what it’s endured. Lightning strikes? Cruel humans? I wondered just how many animals sat upon those branches. I imagined every thing from ringtail cats to coatimundi, golden eagles to mountain lion. Did they know it was the biggest tree it the area? Did they understand it’s significance? Its magnificence? Probably not. But I like to think there is a kind of awareness of kinship that crosses the barrier of species. Actually, the tree appears to be in incredible condition. No destructive carvings. No bullet wounds (from what I could tell, anyway.) Sadly, large trees like this often show signs of abuse by humans. The Big Tree appeared to be treated with respect, as it should be, despite this being a heavily used trail. These rarities hold key to longevity in the wild. They are champions of evolution. Survivalists.

The Big Tree is an Alligator Juniper (Juniperus deppaena) and is the second largest Alligator Juniper in the nation, (the largest ranked Alligator Juniper in the nation is located in Prescott, AZ). However, this Big Juniper Tree, is around 63 feet tall, with a diameter of 70.2 in, a circumference of 18 ft. 4 in. It’s crown spread is approximately 62 feet. It’s age is estimated to be around 800 to 1,000 years. Though it’s size is a rarity, it’s species is quite common. The Alligator Juniper are most easily distinguishable by their unique checkered bark pattern which resembles alligator hide. These plants have a limited range, found only within the Southwestern United States throughout New Mexico, Arizona and in parts of Texas and Mexico as far as Oaxaca. It is of the largest of Juniper species in the Southwest and serves as an important plant for wildlife. Its powdery-blue colored berries are eaten by multiple bird and mammal species. The plant provides valuable habitat for wildlife at nearly all states of life. Their relatively large size offers shade and shelter for elk, deer and several other mammals and birds as well.

There’s a creek that runs near the Big Tree where a downed cottonwood trunk lays across, creating a natural bridge. Exploring the area, dense with scrub oak, I find that the space abounds with a variety of richness: lots of leaf litter, downed and decaying branches, mosses and fungi. All the signs of a healthy forest. Mesmerized by the brilliant green mossy mats I lower my body to meet its visual intricacies. Completely charmed by the micro-world’s natural whimsy. These mats are in fact, cryptobiotic crusts and are also quite special, made up of multiple organisms including lichen, mosses, fungi and more. Cryptobiotic crusts are often found in drier areas, such as this place, where harsh conditions prevent abundant vascular plant life. The community of organisms that make up these crusts depend upon the micro-climate and conditions to form soil stabilizing structures that retain moisture and prevent erosion. They too, can be hundreds and even thousands of years old! And so I am careful when walking about them. Trailing alongside the creek, I find mossy trunks and branches and am tickled by the fact that mosses really do (for the most part) grow on the north side of trees.

We spot a set of elk tracks as we make our own route back. Imagining just how tall the majestic creature was, I walked along its steps with honor and amusement. The tracks lead us near a mature ponderosa pine! Another long-lived being. Ponderosa pines can live up-to around 400 years old. Seemingly the only ponderosa for miles, we stop to marvel at its loveliness and lean in to it smell its unique sweet aroma. The chemical responsible for the vanilla-like scent is found within the resin where when warmed by the sun emits the sweet odor. Near the Ponderosa we spot some black bear scats, full of seeds. Another treasure I wasn’t expecting to find. I am grateful for the liveliness of this place and happy to be there. Though soon enough we are en-route back to the trailhead, leaving the Big Tree’s site, we stop one last time to catch glimpse of the tops of its canopy and say aloud “Goodbye…”. Leaving areas like this are always met with bittersweet “good-byes”, for I feel it is often like walking away from home. 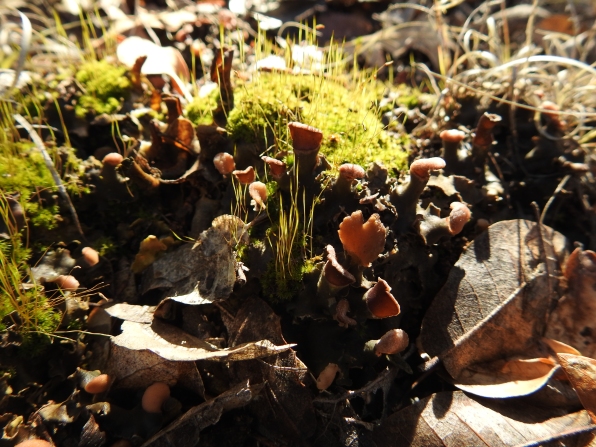 The Big Juniper Tree in the Sun 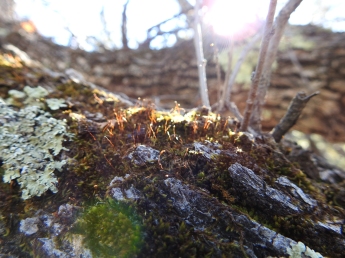 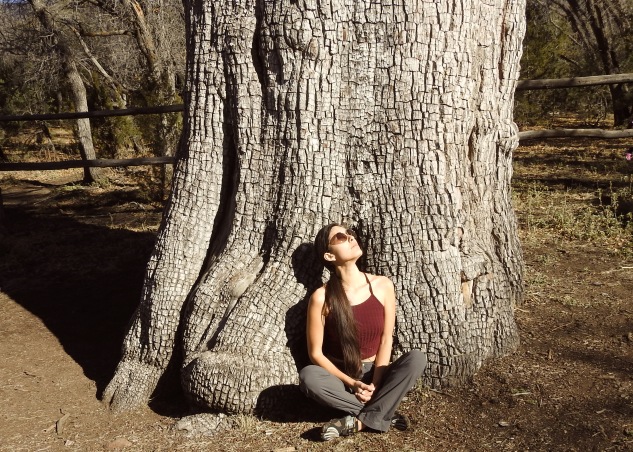 Sitting with the Big Juniper 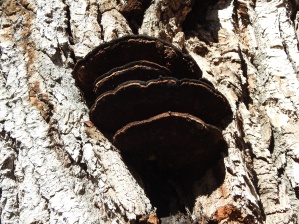 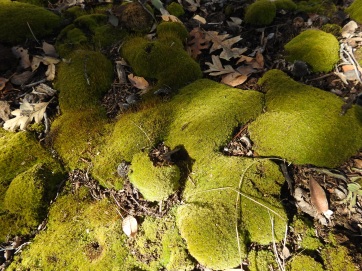 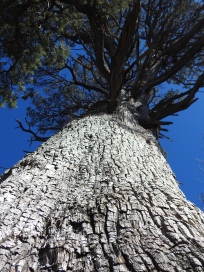 Trunk of the Big Juniper 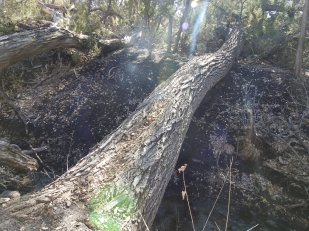 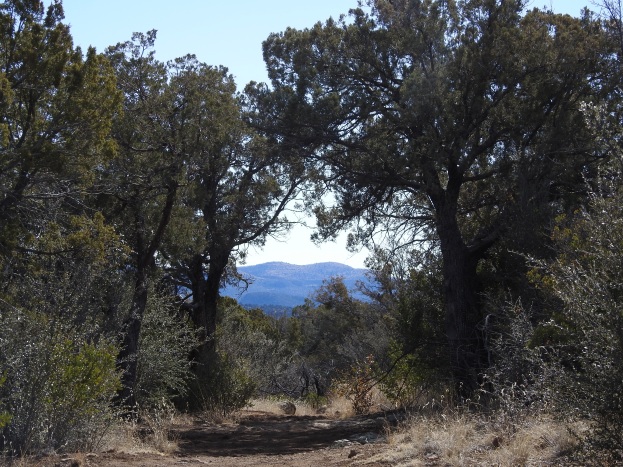 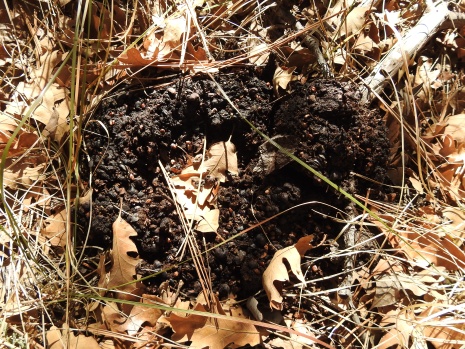 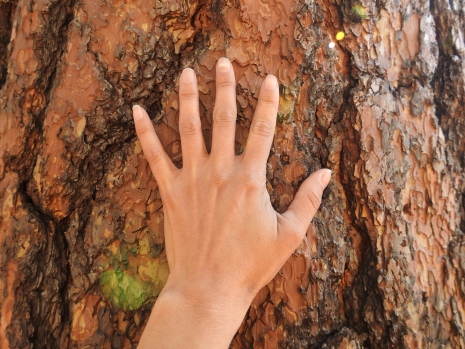 A Lone Ponderosa: Touching a Old Being 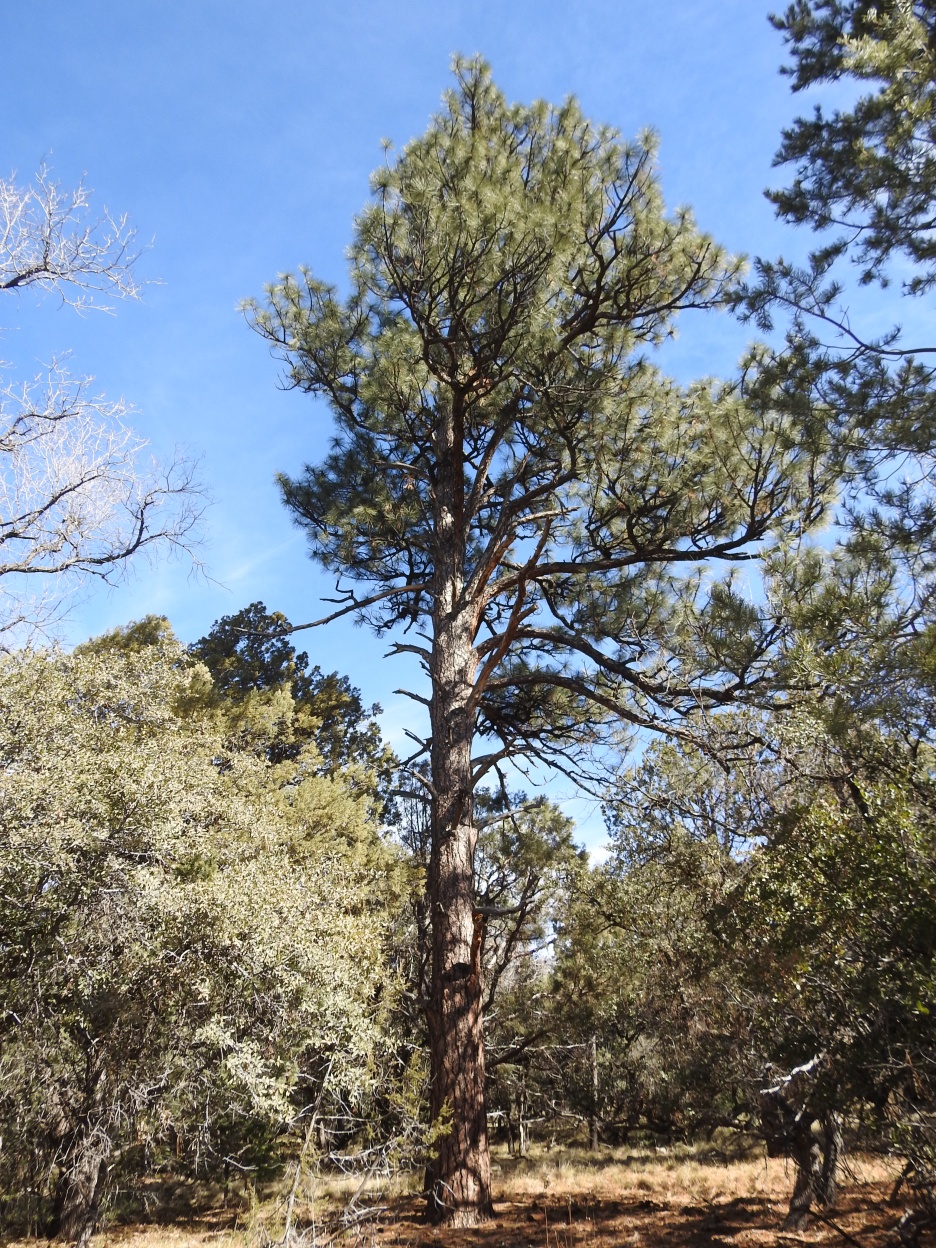